Flanders Fields Marathon in Ieper (September 2014) was a special race!

100 years before, the First World War started. Which has a number of “lessons learned” in its own respect. I found & find it hard to imagine what has happened in Flannders Fields. It’s almost impossible to grasp this. On the Allied side, 5.5 million soldiers died, 12.8 million soldiers got wounded, and 4.1 milllion soldiers went missing.

So, the context of this marathon was quite special, it’s an experience I will always remember. First visiting the memorial graves, trying to understand why millions of young men have been slaughtered. It makes you reflect on mankind, and the little progress we have made in the history of mankind. To make the historical reflection more tangible, every runner had a race number with the name of a Soldier added to it.

In my case, this was Charles Fausset, an Australian soldier. I tried to find more about this soldier, but I didn’t find too much information online.

The parcours was fascinating. Where we ran (more or less : “for fun”), so many people have died 100 years ago, in miserable circumstances.

Wearing this special number and running along historical places, made this more than just a race. There was also a kind of “connection”, running along the trenches was an impressive experience.

I have always had a keen interest in the history of World War I, and I recommend the following online source: http://europeanhistory.about.com.

On the (semi-)fiction side, I recommend “Oorlog & Terpentijn” by Stefan Hertmans, about the life of his grandfather, from his impoverished childhood experiences in Ghent in the early 20th century, through his experiences as a frontline soldier in the First World War, and far too early, the loss of his beloved.

On the side of these events on the World stage, what about the running experience? I’m afraid I made a bit of a beginners mistake: I started too fast, at a pace that I could not sustain for 42 km’s. And as such, ending up with a really interesting result at 21 km, but then in the second half, I paid for this, ending in 3 hrs 55 minutes.

Most theories on this topic defend that the best approach is to run at a pace that is as “equal” and stable as possible.

The ambition of running a marathon for most runners is running at the highest possible pace which you can sustain in a constant way for 42 kilometers.

Of course, the longer the distance of a race, the harder it becomes to run a “negative split” ( = running fast in the 2nd half compared to the 1st half).

So the key question is of course, why did this happen ?

The honest answer is: I don’t know.

Probably, there’s a variety of reasons for this … Not listening carefully to your body (because your body tells you this very clearly, if your pace is too high) ?

Joining a group of runners who run too fast for you ?

Perhaps first & foremost, the psychology of it: if you’re TOO keen to run a good race, that makes you want to start very/too quick ! 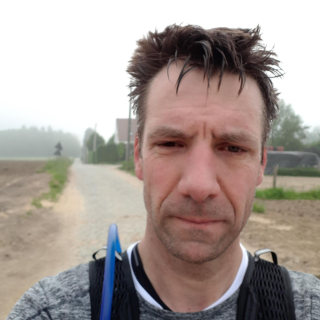